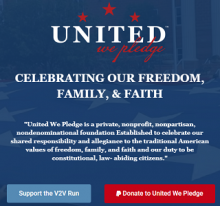 The students in Utah will learn more about America’s History with a sister institute to the American Village!

Below you will find an exciting opportunity for our Daughters to attend Tuesday, April 19th, The Village to Village Run, which starts at the American Village and continues to Utah, for the groundbreaking of a facility in Utah on July 4th. How exciting for the kids in Utah to learn more about our American History!

Please consider attending the kick-off ceremony on Tuesday, April 19th, at 9:45! Also, Mr. Jones will make several stops along the way to the Mississippi line with smaller ceremonies. You are also welcome to attend these events as well.

St. George, UT— Marking the 247th anniversary of the shot heard ‘round the world, non-profit organization United We Pledge begins a bold journey to raise awareness of and funds for building the American Village West. On April 19, 2022, a program will be held to initiate the journey of elite athlete Tom Jones from the original American Village in Montevallo, AL, to the future site of the American Village West in Hurricane, UT. To complete this “Village to Village” challenge, Jones will run 76 marathons in 76 days, covering 1,965 miles.

The send-off event will be held at the American Village Campus located at 3727 Highway 119,Montevallo, AL, will include speakers from United We Pledge and the American Village, followed by a reenactment of the first British and American clash provided by the Sons of the American Revolution. As their muskets fire, Jones will set off on his quest.

Show others ASDAR’s pride in country!

Bring your flags and patriotism to show Mr. Jones encouragement for his endeavor to bring recognition, patriotism, and American History for the

American Village of the West!